Apple’s new 2018 MacBook Pros are now available, and the top specs are much faster

Yay! Although I specced out my dream laptop and it came to eight grand.

Apple is rebuilding Maps from the ground up

Good, in-depth article. The section about the tech in the Maps vans is especially interesting given Apple’s interest in AR and autonomous vehicles.

Shortcuts: A New Vision for Siri and iOS Automation

Mobile gaming is having a moment

What I Wish the iPad Would Gain from the Mac

Apple Watch Is a Bridge to the Future

Halfway between touchscreens and voice/AI (via birchtree)

Why Apple’s HomePod Is Three Years Behind Amazon’s Echo

This sounds to me like a regular Apple development process, and I also don’t see how the Echo and HomePod are in competition (Echo starts at $50, HomePod costs $300 more).

That said, the Echo – or rather, the built-in Alexa assistant – has changed what people expect from a “smart” speaker. As an audiophile-ish smart speaker, HomePod seems more in competition with Sonos, and the latest Sonos One – which has Alexa built in – is the product that blows the HomePod, as we currently understand it, out of the water.

Apple Glasses: What are they and when are they being released?

A small-screen iPod, an Internet Communicator and a Phone

Horace Dediu on the evolution of the Apple Watch

Saying Apple “has tested” not even having a virtual home button on the screen – instead it would be a swipe up from bottom.

And all-new form factor. Making the watch an independent device would be a very good thing.

Whatever the new expensive iPhone is going to be called, because of Apple’s (surely accidental?) release of HomePod firmware, we now know 1. the rumoured edge-to-edge-with-unibrow screen is real, 2. its resolution, 3. it has some crazy infrared face-detector thing.

This has spawned some speculation about the UI on such a thing. Since the chinless design means it’s almost certain the bottom strip of the display will include space for a virtual home button, it would make sense if the navigation bar wound up there too. This would also be easier for big-phone users to reach.

Another issue is: does Apple embrace the notch or hide it? The leaked device icon implies that they will embrace the notch (have the status bar match the colour of the screen rather than the black of the notch). I dunno. It is rumoured to be an OLED screen like that in the Apple Watch and some Android phones, and in OLED screens black pixels are actually off, so they can match the bezel exactly.

The other thing is the crazy 3D face-reading camera. Presumably that means TouchID is out. But taken alongside Apple’s new and potentially yuuuuuuge ARKit, 3D sensing cameras could mean some amped-up AR jazz up in this piece. Sadly, as close as these long dreamed-of technologies get to reality, it just makes my brain skip ahead to Apple Glasses and how close those might be. Can never stop dreaming those dreamin’ dreams!

How much will the new iPhone cost?

Horace Dediu is predicting the price ceiling will be $1100, so perhaps $999 for the starting rung of the fancy (Pro?) model

Daring Fireball: Speculation Regarding the Pricing of and Strategy Behind This Year’s New iPhones

I smashed my phone recently now and am using a backup iPhone 5s, and find myself reading iPhone rumours with much more eagerness.

How the iPhone Was Born: Inside Stories of Missteps and Triumphs

Apple’s AR is closer to reality than Google’s

Funny how just after I post that article talking about magic notebooks and how I use One Note for handwriting recognition and how it’s not quite there yet, I discover this app Nebo.

Nebo is a handwriting recognition app. And it works. Really well. Just to prove it to you, I’m using it right now. here’s the screenshot of what I wrote: 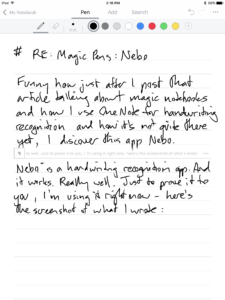 Part of what makes it effective is that it displays its interpretation of your scrawl live as you write. So if you do get a little too sloppy – ironically, this happened to me with the wards “handwriting recognition” – you can immediately adjust. It has a lot of neat pencil gesture tricks, too. Like to erase a word, you scratch it out. Or underline for bold, etc. But the major part of it is that the text conversion works really, really well. Living-in-the-future well.

Anyway, this app is taking a place in my home screen IMMEDIATELY.

I wrote seven years ago about magic books. By that I meant various technologies that were transforming the way I/we read: RSS, read later services like Instapaper, e-readers like the Kindle, audiobooks and podcasts, etc. etc. What would a magic notebook be? Something that transformed the way we create, not just consume? For many years this has been a notebook computer, i.e. a laptop. But for me, the magic notebook is now the iPad Pro.

Let me go out on a limb and declare writing with a pen or pencil as far more natural-feeling than typing on a keyboard. We learn to do it earlier, and because it’s easier to switch to drawing, and to use space to arrange your writing, it’s more versatile. I love handwriting, especially for brainstorming. But I’m not a Moleskine dude. I’m terrible at keeping track of physical pieces of paper and I am so totally into having everything all digital and linkable and searchable and easily revised.

I’ve had iPads since the first and almost as early on I was buying various styli. My dream was, I hand write something onto the sheer sparkling glass of the iPad and it converts itself into glorious digital text. Now that’s a magic notebook. But it was not to be, not then. The early styli felt like writing with someone else’s finger. But I knew I wanted to play around with the iPad Pros once they came out, more or less because of the Pencil.

So I got one. (Note: I got one a couple months ago, so I’m referring to the previous generation iPad Pro 9.7”, not the new ones that just came out (d’oh!).) And: my dream isn’t here, but it’s a hell of a lot closer.

The pencil works really well for my purposes, which are short on drawing, long on hand-written notes. I use OneNote and although the Pencil support isn’t the greatest, it lets me keep everything in one place. Also, it has handwriting-to-text! It’s not great, especially as my handwriting looks like something you might write in mud with a stick as death spasms wracked your mutilated body. Plus, seems that feature only works on Microsoft OSes right now (speaking of death spasms).

UPDATE: See this post about the app Nebo for some seriously next-level handwriting recognition.

But it’s getting there. So let’s imagine a near-future utopian world in which Microsoft has enabled this on the iPad. Then let’s imagine that same world where the machine vision craziness has continued to proceed apace. Assuming we’re not all cowering in the muck as T1000s hunt us down to force us into indentured servitude in SkyNet’s underground sugar mills – or something – then perhaps my dream will be here. Writing longhand, tapping convert and leaning back as my insta-posted genius blog post / promo script goes out into the world and somehow causes dollar bills basically to start flying out of my screen as I give a double thumbs up and grin wildly, revealing a full set of solid gold shark teeth…

Sorry, where was I?

Something something iPad something.

So anyway, I’m using it for brainstorming and rough notes and then kinda formulating my first draft with an actual keyboard. And oddly enough, here’s where two other Microsoft products make an appearance, in hardware form.

Number one is a $5 loop with adhesive, the Surface Pen Loop, which you can use to affix your Apple Pencil… well, anywhere really, but I’m sticking it to the edge of my case like so:

That way the pencil’s always with the iPad.

The case is a cheapo number, the Moko Ultra Slim. I’m… very fussy. There, I admitted it. So I bought two other cases and returned them, and tried a few others in-store, and this $17 Moko is my favourite. It’s like an Apple Smart Cover in principle, except a lot cheaper and the back is clear plastic. Importantly for me, it’s light and slim.

When I do need a keyboard I have Microsoft product number two, The Microsoft Universal Foldable Keyboard. Like I said I tried a lot of cases, including the two premier keyboard cases, the Apple Smart Keyboard and the Logitech Create. I didn’t find the Apple Keyboard comfortable to type on. The Logitech Create was great for typing, but as a case it’s not great – it doubles the weight of the iPad, for one. And both of them are expensive. The Microsoft folding one is thin and light, costs half as much, and stays in my bag until I need it. Most of the time I don’t need the keyboard, and so the iPad is as light and portable as possible until I do. in that case it folds out wider than the screen of the tablet, giving the keys more room. I will not lie: some of them are still cramped. But I find it quite agreeable to type on. I still have a full-sized Bluetooth keyboard at home and I figure if I ever need to write for hours on my iPad I will bring that.

Slightly longer: this iPad is my favourite thing for: reading the news, browsing the web, editing photos, writing, and general purpose computing. Certain things I still need a computer for: video editing, web stuff (although thanks to the incredible Coda I still do a bunch on the iPad), design. The pro apps are still lacking on the iPad. I love the portability compared to a laptop – I mostly have it in my bag by default.

My iPad is already out of date with the advent of the 10.5″ model, which has a slightly bigger and significantly better screen, is faster, and boasts better pencil performance. Thing is, I’m happy enough with this one to not care. I’m good. Mine is already overkill in all of those areas. (It could be, though, that the Smart Keyboard is greatly improved by the added width; that’s my one regret with this model, but it’s not much of one.)

IOS 11 has a shitload of iPad-specific improvements: easier app switching, better multitasking, a file browser, and more pencil functions. I’m excited about all of those.

The area that needs real improvement is the pro app world. I can’t find a good pro video editor: where is Final Cut iOS? I am having trouble finding a design app that meets my needs. I’ve run into situations with relatively simple photo manipulations, say wanting to rotate a batch of images at once, where the stock photos app doesn’t do the trick and I don’t know where to turn. Hopefully Apple pushes forward in this area. It certainly looks like they are. They’ve been touting the iPad as the future of computing for a while, and only recently have they begun to back that up. And only recently do I think I agree with them.

Sure but no way Apple will sell some system that goes into someone else’s car models. So this is like a half-assed denial that they are making a car, despite all the permits they are applying for.