that is so intensely quotable that I just gave up choosing a quote.

That and Obamacare in the same week? America, lurching into the future (or recent past, depending on the country you live in)

The Vanishing Relevance of SmartTrack

I’ve always wondered just how useful a train with a 15 minute headway would be (arguably fine if you’re walking or driving there but not if you have to schedule it against the headway of a connecting bus route, say). Now they are saying it may be more like 30 minutes. That’s rough.

Bike friendly without being car-unfriendly.

This is a post for bike month, continuing from this one. All of these live here, in reverse chronological order.

So yeah, I wound up buying a Simcoe. These are city bikes designed with Toronto in mind. They have all the city bike conveniences, plus some weather resistance, yet don’t feel heavy or slow. 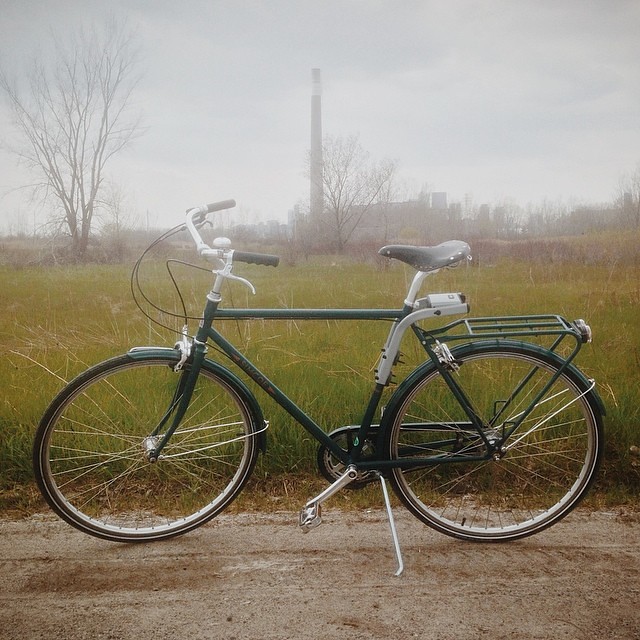 I bought this bike the first year it came out, which sums up most of my criticisms. A lot of the accessories were not firmly attached – the fenders came loose quickly and made a horrifying rattle; the kickstand came loose and was of debatable quality anyway, so I replaced it.

I was surprised by the weight of the thing. Any of my beater mountain bikes would be lighter. That dismayed me.

I was holding out for the “Signature Edition” 7-speed but it was delayed and I needed a bike, so I got the cheaper 3-speed. I say cheaper, but the bike was still like $900, which is more than all of my previous bike purchases put together.

It was supposed to be blue, but it’s really a blue-green that honestly I’m not that fond of. Ok honestly? There’s no real ugly to be had here. It’s just a riff on a movie title that doesn’t quite match. I mean I would probably choose a modern bike style over the Simcoe’s retro looks, but this bike is, to continue the metaphoric math, better looking than all of my previous bike purchases put together.

Everything else. Even some of the bads.

Despite the weight, because of the slimmer tires and the quality components, this bike rolls faster than … all of my previous bikes put together. A few pedals and I glide for ages.

I thought three gears would be a problem – my last bike had 21 – but if anything, it’s a blessing. There’s just less fussy stuff to do. Plus internal hub gearing is much smoother than the usual derailleurs, and it allows for a full chain guard, which means I’ve never gotten bike grease on my pants. The fenders are also great (and should be on every bike); I’ve ridden a few times in the rain without incident. Nothing to be afraid of.

I’m no bike expert, and I can’t compare the Simcoe to other bikes in its category. But I love it. It obviously signifies something special to me – a new way of looking at biking. A new chance at mobility.

Pope challenges world to clean up its filth

“With a poet’s lyricism, a former chemist’s precision and a pontiff’s moral thunder, Pope Francis recast humanity’s relationship with nature in stark ethical terms, hoping to spur a warming, filthy world to clean up its act “before it’s too late.”“

What we forget about Ornette Coleman

“Big box stores are the lowest-hanging science fiction prompt in any given town.”

Entourage And The Slow-Burning Death Of The American Dream

Love this write-up of the new film, via ÿ.

Why Americans have such bad taste in beer

Three years ago, I eagerly hopped on my bike for the first ride of the spring and rode up my alley to Dundas East, where I needed to turn left. It was rush hour, so cars were backed up waiting for the light. All I needed to do was make my way through these stationary cars and get to the bike lane just beyond. I saw a gap between a car and a pickup truck, so I went for it. The truck pulled forward and blocked my way.

The driver yelled at me, saying I should walk my bike to the lights at Greenwood and cross there. Said lights were currently changing, so now I was stuck as oncoming traffic headed toward me. The truck pulled away. I yelled “thanks” – I intended it to be dripping with sarcasm but really it was soaked in futility. Someone must have let me in, but the damage was done.

Hopefully I don’t have to point out that the truck driver was wrong about bikes and intersections (bikes are considered legally “road vehicles”, the same as cars, with few exceptions1). Or that he was an asshole. But it goes to show how bad it can be biking in this city, much like in many North American cities, I’d guess. My first ride of the year was not even a minute old before someone was needlessly endangering me. More frequently it’s carelessness rather than spite, but the latter does happen. I could feel things getting worse as Rob Ford’s mayoralty sunk in. He campaigned on ending “the war on the car”, on banning streetcars and condemning bikes to trails. Most drivers are decent people, but Rob Ford’s road rager transportation philosophy made the assholes feel empowered.

There is definitely a correlation between geography and belief. The relative car-dependence of downtown Toronto vs. its suburbs goes a long way toward explaining the political divide between the regions. As density increases, the traffic gets worse, and the only way to alleviate it is to encourage walking, bikes and transit, which often takes road space away from the operators of private motor vehicles, which makes them feel beset upon, despite their continued position of privilege in perhaps every regard of urban transportation other than cost. Even that is debatable.

It doesn’t have to be this bad, and hopefully now that Ford is just a councillor again it can start to get better. The results of the Richmond/Adelaide Cycle Track pilot project are in. These physically separated bike lanes took away a car lane but tripled the number of cyclists using the route, despite their stumpy length. Perhaps more interesting is the survey feedback. Of the 1424 survey respondents who self-identified as non-bikers, 54% strongly agreed the lanes should be made permanent. Only 25% strongly disagreed. Even more interesting, data indicates that car travel time has actually improved since the lanes went in. One more bike is one less car, quite often, and that should encourage both cyclists and drivers.

1 Bikes are not allowed on highways, and are expected to keep to the side of the road where safety permits.

Pay no attention to the lobbyists behind the curtain

Re: the pro-Gardiner campaign, which is highly coordinated, and encompasses the CAA, trucking lobby, financial district BIA, and clearly the mayor, who just today said, “I am not the mayor for cars or for bikes or for trucks.” Certainly not bikes.

Jaguar Attacks Caiman in This Intense Series of Wildlife Images

for a little nature badassery this morning